The mass appeal of video games

Computer game competitions as evening-long events in sport stadiums? This notion, while seeming unreal at first glance, has long been a reality. Sporting competition in the virtual word is enthusing young consumers across the globe. Investors may also be able to take pleasure in E-Sports one day.

So-called electronic sport (E-Sports) is about to become the next billion-dollar industry. However, so far it has not made any waves in investment circles. This is primarily due to the fact that this phenomenon is found particularly in the 18–34 age group. However, the more the trend gathers pace and the more millennials shape the work and consumer world of tomorrow, the more interesting this development will become for investors.

Contrary to classic video games, competitive spirit is at the forefront of E-Sports. The competitors—lone wolves or groups of players—line up against each other online. This ceased to be a niche for computer freaks long ago. For example, in China, the USA, and Korea, such electronic showdown is not only recognized as a type of sport but is also being practiced professionally increasingly.

The number of leagues and professional E-Sports players is growing continuously, as is the crowd of fans. Given the over 300 million E-Sports fans (Newzoo, 2018) and the particular popularity of soccer video games in Europe, it is hardly surprising that it is now not just the top clubs such as Paris Saint-Germain that have their own E-Sports teams, but also smaller clubs like FC Basel and VfL Wolfsburg.

This development is extremely interesting for companies and marketing firms. Spending on broadcasting rights, advertising, and sponsoring is increasing accordingly. Revenues of almost 500 million US dollars were generated in this area in 2016, and this is set to increase to 1.5 billion US dollars by 2020 (Newzoo, 2018).

Video game producers should also profit from this trend. Digital content and increased downloads are making the expensive distribution of their products via warehouses increasingly irrelevant. This is driving firms’ revenue growth and improving margins.

Companies active in E-Sports could emerge as winners on the stock exchange. The opportunity arises for investors to secure a stake in these growth markets, for example through commitments via individual shares or in special funds.

The Vontobel “Megatrend” model helps investors to keep their eyes on the future. The model is based on three pillars that, in our view, represent the societal changes we are currently experiencing: demographic change, the emergence of a multipolar world order, and rules for responsible business practices. 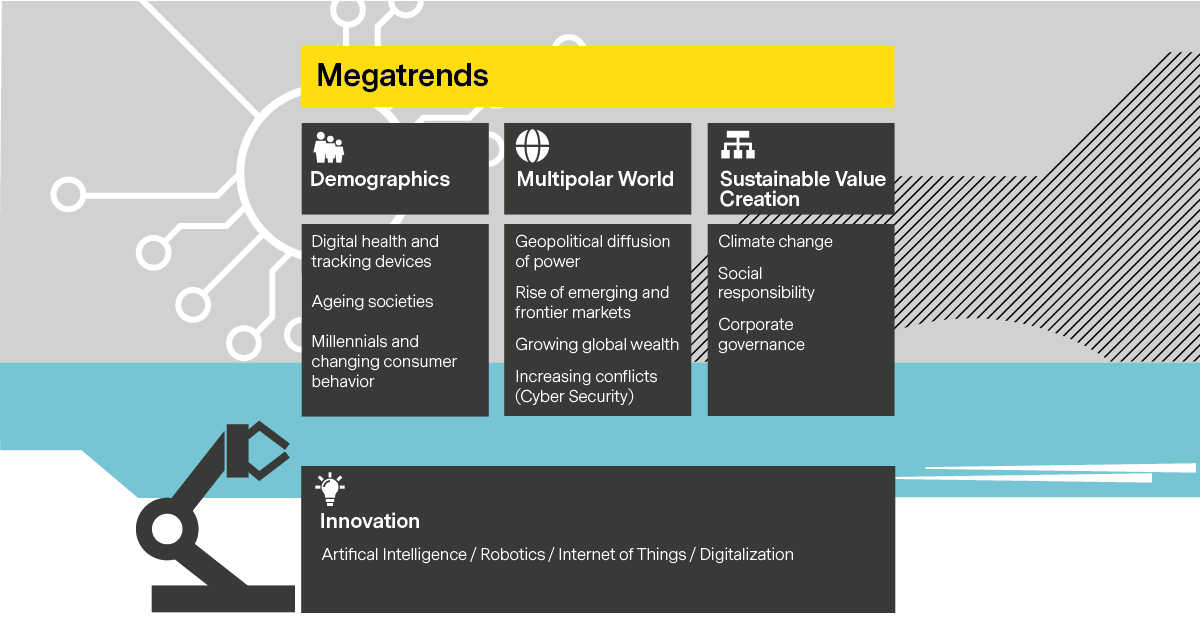