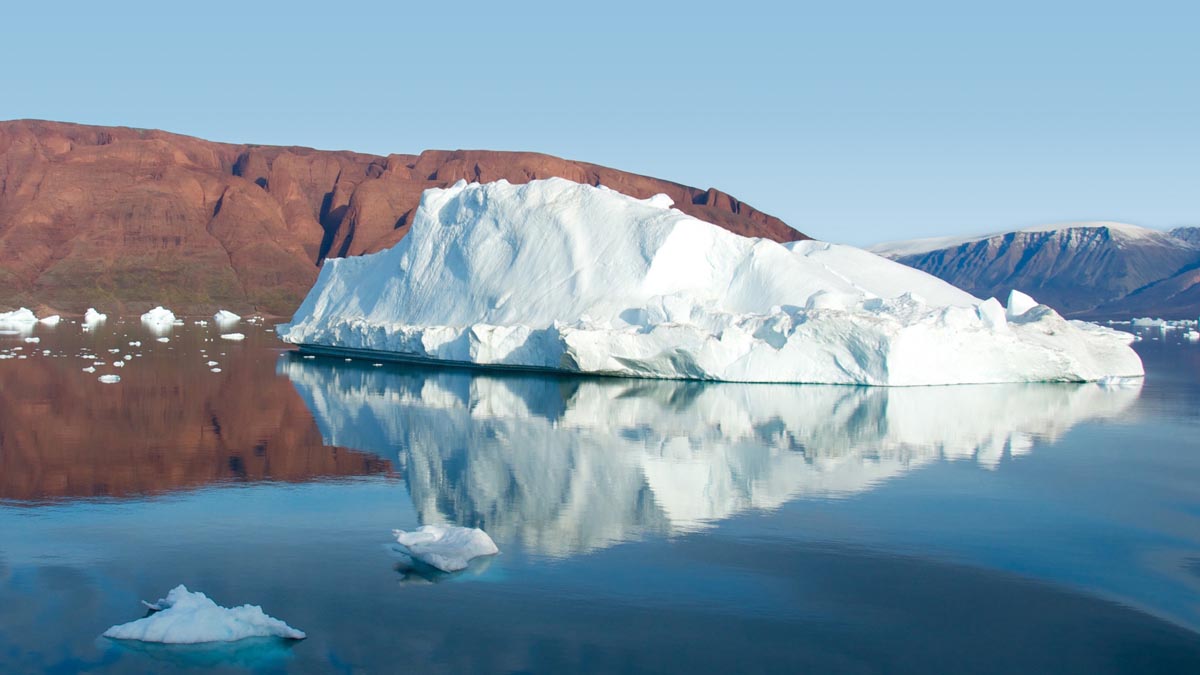 A bone of contention in geopolitics: One of the barren islands that become visible in Arctic waters as its ice shield melts. © Wired

In August 2019, satellites scanning the Arctic circle noticed a remarkable transformation: the region’s ice receded to such an extent that islands previously submerged beneath glaciers were now visible. The climate crisis has opened up new land that can be exploited for political and economic gain.

At the end of 2019 a Russian navy expedition charted five new islands, which are located in Novaya Zemlya and the Franz Josef Land archipelago. This marks yet another coup in the region for Russia, a forerunner in making use of the changing Arctic landscape. According to the Russian Geographical Society, between 2015 and 2018, more than 30 new islands, capes and bays have been discovered in the region. The latest discovery includes an island as large as 54,500 square meters – an area equivalent to the size of more than seven football pitches.

The Arctic is a region of global political and economic importance – its ocean connects Asia, Europe and North America. Around ninety per cent of international trade takes place within these three continents. The region hosts massive stores of untapped resources, including a large portion of the world’s underground petroleum.

But the region is being dramatically reshaped by climate change. The temperatures in northern Greenland, for instance, hit a record high in June, 23.2°C, 0.1°C higher than the previous year. Sea ice coverage was 19.8 per cent below average in July, another record. And the UN reported in September that glacier loss between 2015 and 2019 was the fastest in history. It is only because of these huge environmental disruptions that coups like Russia’s are possible.

This changing geography has global consequences. Currently, the Arctic shipping season is short – conditions are optimal in September or October. A UK government report says that climate change could eventually treble the length of the season and, depending on which model you consult, leave the Arctic free of ice during summer by 2035, allowing ships to sail across the North Pole. The UK, for instance, would then be able to save ten to 12 days on voyages to East Asia, by taking a shortcut across the North Pole during late summer.

In August 2018, Mærsk, the world’s largest ship and supply vessel operator, sent the first container ship through Russia’s Northern Sea Route from Vladivostok to St. Petersburg, taking the Bering Strait up past the North Pole, rather than the existing route around China and through the Suez Canal, reducing its normal distance by 40 per cent. Russia also has access to the largest and most advanced fleet of icebreaker ships, necessary to safely traverse the waters. The country sees this as a business opportunity. “It envisions itself as potentially being able to charge fees for the use of this icebreaker fleet,” says Sidharth Kaushal, a research fellow at the Royal United Services Institute (RUSI). “One of the former ministers, Dmitry Rogozin, compared it to the caravan routes of old, where the empire that controlled the caravan routes could extract a toll for crossing, and he made the case that Russia’s fleet, and its icebreakers in particular, could take that commercial role.”

But Russia has a major competitor on the horizon – China. In 2013, China became an observer on the Arctic Council, an intergovernmental forum that addresses issues faced by the Arctic governments and the indigenous people of the region. (Current members are Canada, Denmark, Finland, Iceland, Norway, Russia, and the United States.) In 2018, China declared itself a “near-Arctic nation” and released an Arctic white paper exploring the potential for a polar Silk Road. “This would exploit the potential of the Arctic to cut down transit times and, by extension, the cost of moving goods and services from east to west in Eurasia,” Kaushal says.

The two superpowers are going to have to cooperate or clash.

The struggle for the next era of world order

With China’s new digital power, the struggle for geopolitical dominance is accentuated. Who will be the new superpower in the digital age?

To the White paper

“So the sub-story of the Russian expansion in the Arctic is the Russia-China relationship,” says Cleo Paskal, associate fellow in Chatham House’s Energy, Environment and Resources Department. “This pushes Russia and China much closer together, which is why you see the Chinese building icebreakers, and why you also see things like the recent joint Russia-China air patrol over the Pacific.”

This could go one of two ways, explains Kaushal. You could see a mutual benefit, with China taking advantage of new routes cleared by Russian icebreakers. But the likelihood of Russia charging high rates for this service, exploiting the Northern Sea Route as a cash cow, could cause friction between the countries. “The other question, of course, is what kind of role China wants to play in the Arctic,” says Kaushal. “Currently, it’s just the Arctic Council states which play a role in Arctic governance, but China has made the case that it’s an Arctic state – this is at odds with Russia’s conception of what an Arctic state is and, in particular, its own special role in the Arctic.”

The changing geography also has serious strategic implications for Russia, which has opened a number of military and scientific bases in the region. “It gives Russia direct access into the Pacific,” Paskal says. “Now their fleet can go right over the top through the Bering Strait and into the Pacific. And the Indo-Pacific itself is becoming an increasing resource demand zone, and also an increasingly strategically congested zone.”

It could even open up points of vulnerability for Russia. “Traditionally, Russia has kept the sea-based component of its nuclear fleet safe in Arctic bastions around places like Murmansk, which are pretty inaccessible to most ships, and a pretty safe place to keep your nuclear submarines,” says Kaushal. “As the Arctic ice melts, that is likely to change – these assets are likely to become more vulnerable.”

Another outcome of the climate crisis will be new business. A UK government report claims that economic growth in the Arctic is focused on four key sectors – mineral resources, fisheries, logistics, and tourism. These will all require shipping and could generate investment reaching $100 billion (£76bn) or more in the Arctic region over the next decade. The melting of the ice caps, for instance, will open up new fishing territories.

This raises the specter of a scramble for resources, says Kaushal, particularly for energy sources like oil and gas. “A very significant chunk of Russia’s energy resources and its potential future avenues for exploration do lie along its arctic sea bed,” he says. “The large state-owned Russian companies like Rosneft and Gazprom will be very keen to have either monopoly or close to monopoly control over the extraction and sale of these assets.”

It’s important to bear in mind that taking advantage of these new routes is very much a plan for the future. “It’s still very hard to navigate, with high insurance costs,” says Stephanie Pezard, senior political scientist at the RAND Corporation, a US-based think tank. “So it’s not the boom that you see discussed in some places. If you look at the actual numbers of how many ships take that route, it’s very small.”

All of these plans will have to take into account an important consideration – the people who already live in the region. “The Arctic isn’t empty – there are people who live in the Arctic, and they are very aware of what’s going on geopolitically and how decisions being made in Moscow or Washington or Beijing are affecting their lives,” Paskal says. “And, depending on the country, they’re going to have larger or smaller roles to play for the people of the Arctic in determining what is or isn’t possible.”