Even Swiss premium watchmakers are jumping on the smartwatch bandwagon

Electronic timepieces with smart functions have become a fixture in the watch business. Year-on-year sales figures are growing at double-digit rates, with experts expecting a doubling of unit sales within the next four years. How are Swiss premium watchmakers responding to this trend? A report on the forthcoming Baselworld, the largest watch fair in the world (March 21 to 26, 2019).

The Geneva Watch Salon SIHH came to an end on January 17, 2019. For more than 25 years, this event has been a showcase for luxury Swiss watchmaking at the highest level. Leading the way is the Richemont Group (which owns IWC, Baume & Mercier, Cartier, Jaeger-LeCoultre, Panerai, Vacheron Constantin among others), where it presented its latest mechanical masterpieces. An exception is Montblanc: as early as 2017, the then CEO Jérôme Lambert (who is today the group CEO) recognized the digital signs of the times and launched the smartwatch "Summit 1". Despite its multifunctional touch screen, its look is line with that of a classic chronograph. In 2018, Montblanc took this approach a step further with its smaller and slimmer "Summit 2".

“This smartwatch is a digital interpretation of the fine art of watchmaking. It embodies a synthesis of the design codes of classic Swiss watches, high-quality materials and the latest technologies.”

Visitors to Baselworld 2019 will be seeing a lot more digital watches. Beginning on March 21 this year, luxury giants such as Breitling, Chopard, Rolex and Patek Philippe will be showcasing their new products. But other quality brands such as Alpina, Frédérique Constant and TAG Heuer are on hand as well – and they are all banking on the digital trend. The digital turning point dates back to the fourth quarter of 2015, when Swiss manufacturers exported a total of 7.9 million watches, compared to 8.1 million smartwatches, of different international provenance. Since then, their sales figures have been growing continuously, with insiders speaking of eleven percent growth per year. It is thought that in 2022 the market will account for about 190 million wearables, with more than sixty percent of this amount attributable to the more technically sophisticated smartwatches with their wide range of functionalities.

"Fine watchmaking, as we understand and practice it, is not affected by all this. People buy our timepieces precisely because they’re enthusiasts about mechanical masterpieces.”

Wilhelm Schmid, CEO of the watch manufacturer A. Lange & Söhne

The industry leader is and remains Apple. This US-based company generates about fifty percent of all smartwatch sales worldwide. In 2018, more than 18 million third and fourth-generation Apple Watches are thought to have been produced. As the Apple Watch is perfectly integrated via a closed system with the iPhone, the Cupertino company is clearly targeting a more sophisticated buyer segment. Even more ambitious is a collaborative effort between Apple and the French luxury manufacturer Hermès. If you want to put a fourth-generation Apple Watch Hermès on your wrist, with its handmade leather watchband from Paris, it will set you back at least 1,300 Euros. But for that amount it also comes with a specially designed Hermès face.

"Many young people own an Apple Watch and a mechanical watch both. Smartwatches are a completely different world and a different market segment.”

Contrary to smartwatch fans, when aficionados of analogue watches buy a ticking timepiece, it is mostly with the intention that it will last them their entire lives. Regularly maintained mechanical watches can last forever, while the half-life of the electronic does-it-all watches may span only a few years – a technical Achilles heel that does not endear them to smartwatch lovers. Jean-Claude Biver, the then CEO of TAG Heuer, was already confident of this fact when the Apple Watch was launched in 2015. "We have to get a seat on the train ourselves; it’s the only way to know where it’s going,” he said. “And if we see we don’t like the direction it’s heading in, we can still get off." At that time, the “Carrera Connected", developed together with Intel and Google, was already in the pipeline at TAG Heuer, a brand that paved the way for the smartwatch to enter the luxury segment with a product priced above a thousand Euros.

Another pioneer of Swiss-made smartwatches is Peter C. Stas. Thirty years ago, this Dutchman and his wife established the brand Frédérique Constant. In 2015, the couple introduced the "Horological Smart Watch" with analogue indications. A mix of analogue and digital displays distinguishes the "Alpiner X", belonging to the second brand Alpina. For anyone who can’t decide between electronics and mechanics, "hybrid manufacture" has existed since 2018, which includes a smart module in the watchcase in addition to automated manufactured elements.

The league of smart luxury: Hermès Touch for the Apple Watch
If you can’t quite warm up to a run-of-the-mill Apple Watch, pay a visit to a Hermès boutique, where you’ll find the much more exclusive "Apple Watch Hermés", with its captivating hand-sewn leather watchband, of the highest quality. You can choose between the classic "Single Tour" or the extra-long "Double Tour". The perforated leather of the watchband is an especially sporty tribute to the design of Hermès’ classic driving glove, and is available in grained Barenia calfskin. After activating the display, a typical Hermès face appears. 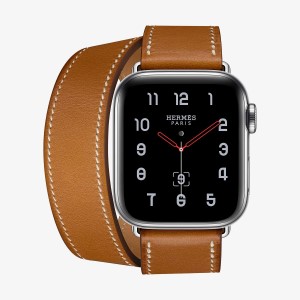 At home in two worlds
In the case of Frédérique Constant's hybrid manufacture, the question of conventional mechanics or smart electronics doesn’t even come up. This wristwatch unites both worlds in a single watchcase. For the time display, the company-produced automatic caliber FC-710 is responsible. Everything else is handled by a front-mounted module. After connecting to the smartphone, its display automatically notifies the state of health of the ticking base caliber. The case contains a circulating device for tensing the mainspring. Two electrical charging contacts are embedded In the holder with a micro USB socket. 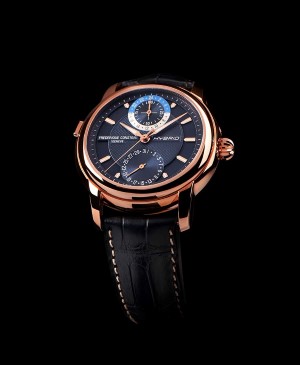 As you like it
In 2018, TAG Heuer introduced the smaller, 41 mm version of its smart "Connected Modular". Wearers view a high-resolution AMOLED display with optimized brightness. After having ramped up this Swiss-made product, around 30 different watch faces can be chosen now. A second level includes special timekeeping applications independent of the smartphone, such as a stopwatch, timer and alarm. This is followed by sensor-controlled functions, including "Google Fit". The connection to the outside world is via WiFi or Bluetooth. In the wink of an eye, the electronics housing can be exchanged for one with an automatic interior. 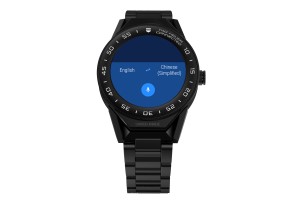 At the peak
In September 2018, Montblanc launched its "Summit 2" with the brand new, energy-efficient Snapdragon Wear 3100 chip set. Compared to the original version of the watch, the diameter was decreased to only 42 millimeters. With a waterproof watchcase, optical heart rate monitor and GPS module, Montblanc aims for the watch to appeal to sports-minded contemporaries. For joggers, the Live Running Coach app was conceived. In addition to these features, this luxurious smartwatch is characterized by numerous personalization options. About 1,000 different face variants can be loaded into the memory. The watchcase is available in steel or titanium. The watchband as well offers wide freedom of choice. 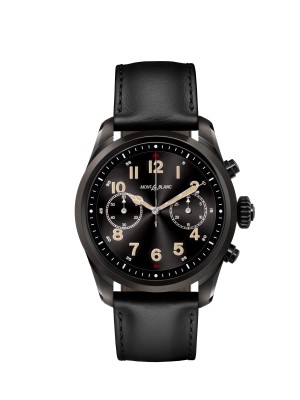