On April 3, 2007, a sleek train raced across the countryside of northeast France, pursued by a small jet aircraft. On an open stretch of track between Prény and Bezannes, the train galloped ahead – eventually reaching 500kph. Officially, no train operated by TGV, the French state-owned high speed service, had ever ever surpassed 515kph, the speed record set by the same firm 17 years earlier. This attempt, christened Operation TGV 150, was aiming to reach 150 metres per second, or 540kph. As the chase aircraft beamed data and video to pensive engineers, the train pushed beyond 540kph, before setting a new world speed record: 574.8kph. 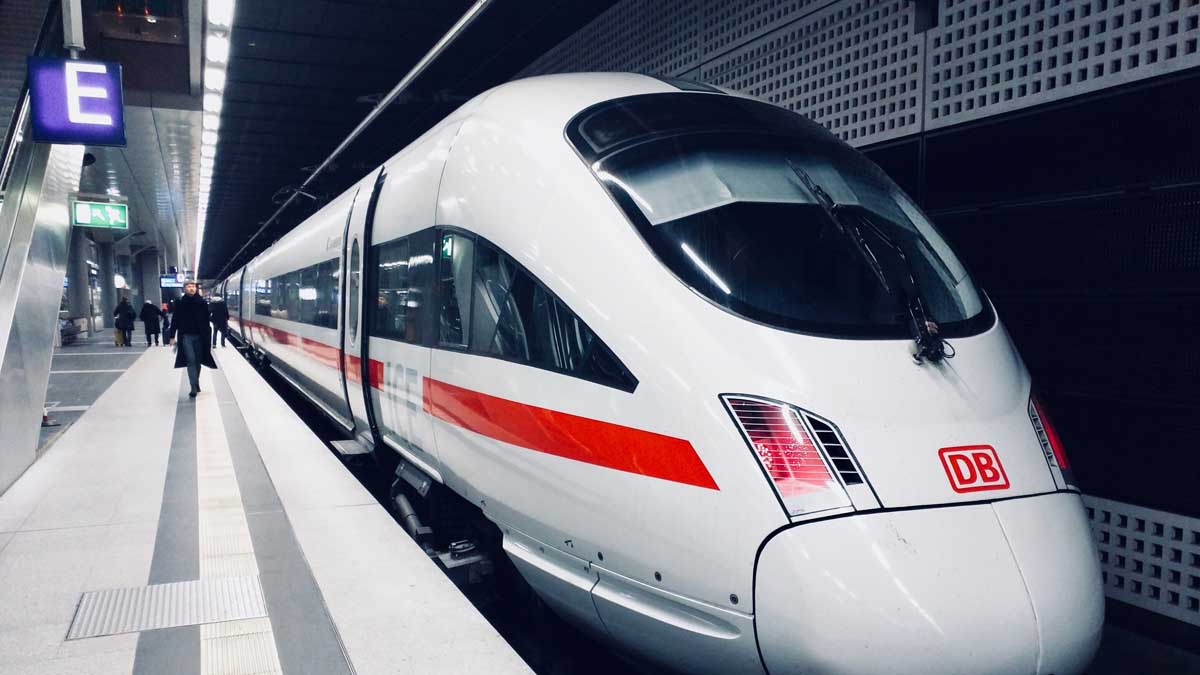 Since then the world has seen a boom in high-speed rail. In 2011, the EU set out to triple the length of the European network by 2030, and since 2000 has invested €23.7bn (£20.42bn) in the development of high-speed rail infrastructure. In the last ten years alone, the number of passenger-kilometres travelled annually on high-speed trains (those operating at speeds over 250kph) has increased 350 per cent, to 845 billion. The lion’s share of this growth has taken place in China. Since the country inaugurated its first high speed service, a 120 km route between Beijing and Tianjin, in 2008, it has built over 20,000km of track, served by 1,200 trains.
With air travel under increasing scrutiny as a dangerously indulgent mode of transport, rail is often touted as the greenest form of mass transit available. Across Europe and Asia, ultra-fast trains are racing to capture overland routes back from the air industry. Can high speed rail make long distance travel green again?
“The big issue is power,” says Alan Vardy, emeritus professor of engineering at the University of Dundee. “The power required increases with the cube of the train speed.” That makes squeezing each additional boost in speed exponentially more difficult – and expensive. “You’ve got to have the electricity to provide that power, and the motors of the vehicle have to cope with that power,” he says.

Slim noses against the supersonic bang

Typically, that power (around 15,000 to 25,000 volts worth) is supplied by catenaries, overhead wires that a train contacts to via a raised arm called a pantograph. These wires are not rigid, but draped between support pillars. “As the train goes under them, it distorts the shape of wire, and the whole thing shifts,” says Vardy. The faster the trains go, the more the wire sways. “There is a fair amount of technology just keeping the pantograph in reasonable contact with the wire.”
And as trains get faster, increasing that speed becomes even harder. Air resistance become a major factor with increased speeds. “Double the speed leads to four times as much loss to drag,” says Hugh Hunt, researcher in engineering at Cambridge. “So high speed trains have really sharp, pointy noses.” The famously long noses of Japan’s Shinkansen ‘bullet’ trains are actually there for a different purpose, however: preventing sonic booms. As a train enters a tunnel, it acts like a piston, creating a shockwave that races ahead of the train. The aerodynamics of long, narrow tunnels can result in a cacophonous bang at the far end – to the irritation of those living within earshot.

Soundproofing hoods at the end of the tunnel

The problem is particularly acute in Japan, where tunnels were built before the effect was understood. Engineers designed trains with elongated nose cones to soften the sudden increase in air pressure. High-speed trains in Europe go just as fast as Japanese bullet trains – if not faster – but the phenomenon is rarer due to larger bore tunnels. Where it does occur, engineers usually tackle the problem by adding a long hood to the tunnel. “Just like the long nose makes is possible to operate in tunnels without any hood, the hood makes it possible to operate without a nose cone,” explains Vardy.
Sudden pressure changes in tunnels are also uncomfortable for passengers, and for this reason all high-speed trains are pressurized to some degree. But this creates a new problem: the pressure difference has to be shouldered by the chassis of the train, and over time, leads to fatigue issues.

At high speeds, noise also becomes a big issue. Narrow tunnels are also a problem in the UK, where they were built for smaller nineteenth century vehicles, and limit the amount of noise insulation that can be added to a modern train. Noise increases with speed, and high-speed trains are usually fitted with skirts to muffle the shriek of steel wheels on steel track. This sound is especially bad if the rail isn’t constantly ground down. “High speed tracks have got to be very, very smooth,” says Vardy. “You can hear it if you go on the Underground in London, or any city, sometimes it becomes really noisy because that section of track has become corrugated.”

Frank Swain is a staff writer at WIRED.UK

Who are we? How do we live today? And how will the new mobility change our lives? How the future will unfold is preoccupying society more than ever, with engineers, doctors, politicians – each one of us, in fact – seeking answers. This report on high speed trains is one of many contributions that shed light on the theme “Environment Social Governance” from a new, inspiring perspective. We are publishing them here as part of our series “Impact”.