Excerpt from an interview with fashion designer Christa de Carouge

Christa de Carouge enjoys international renown as a designer. In this  Vontobel interview, she explains what clothes have to do with style, and why “fashion” was never her concept. 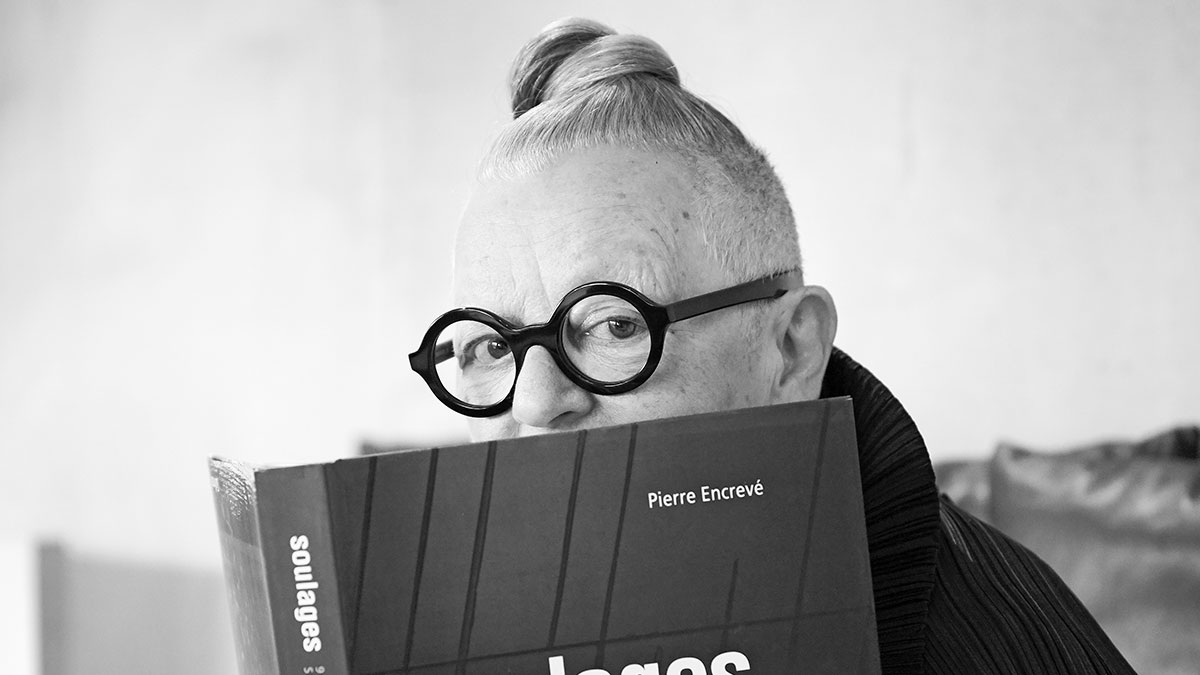 Christa de Carouge’s collections can be worn over each other in a layered look. They are mostly created in black, which earned her the moniker “la dame en noir“. © Foto: Severin Jakob

From Japan she took inspiration. From Geneva, her name. And the material her clothes are made of, from the intellectual heritage of French existentialism.

Christa de Carouge does not simply create fashion. Rather, she has characterized a style of clothing that has brought her international fame. Today, at the age of 81, she has gotten out of the clothing business and is dedicating herself entirely to art instead. In November 2017, “la dame en noir” is undertaking her next big experiment: she wants to dress up the architecture of the Kunsthaus Zug with her fabrics. “Please touch” will be the theme of her fabric installations, as she invites museum visitors to touch and caress the cloth, draw it over themselves let it hang over them.

Ms. de Carouge, in your opinion, what makes a person beautiful?
First, he must be beautiful from the inside out. After that, beauty comes from the way one looks and the way one behaves.

Do you form an image of a person when you only know him as a voice over the telephone?
Yes, of course. I pay attention to the sound of his voice, the vocabulary he uses. It’s a question of style.

What exactly is style?
Either you like it or you don’t like it. By the way, style has nothing to do with fashion. I was never interested in creating fashion.

Can you express your identity through a style?
Yes, absolutely. A style of clothing is like something you inhabit. You feel comfortable with a style, no matter whether you are standing or sitting or lying down. That’s always what I expected my clothing to live up to. I “inhabit” a dress.

You can see parallels to architecture.
As a matter of fact, in my work I often dealt with architecture. Take Le Corbusier as an example. With his little wooden house, the “Cabanon”, he showed how little it takes to actually have everything. And if you put the Cabanon on a beautiful piece of land, say on the French Riviera, then it’s perfect.

What artists mentored and influenced you?
There were many. In my younger years, it was the Parisian existentialist milieu, with Sartre, Simone de Beauvoir and all those people who were always dressed in black. At the School of Applied Arts I attended, it was Johannes Itten, who was the school’s director at the time. He also taught at the Bauhaus in Weimar. Gottfried Honegger and Max Bill were my mentors.

What did you learn from these mentors? How did they support you?
They accompanied me. But sometimes I just observed them. From Max Bill, I learned to be concrete – whether I was working on a graphic design, clothing or staging a show. He would often say to me: “Stay true to yourself.” That’s a principle I have always followed. Of course there were also stumbling blocks along the way, and the road wasn’t always nice and straight. But I have gone my own way. That’s why today, at the age of 81, I’m a very satisfied person.

Which fabrics do you use? Where are they made?
I mostly use polyester fabrics. They come from Japan and are processed in Italy or Spain. The fabric is pleated using hot steam. To do this, you use a special device – picture a waffle iron.

In 1978, you changed your surname from "Furrer" to "de Carouge". How important was this change for your professional success?
It was very important. I wanted to open a shop in Carouge under my name. In French, you pronounced my name, “Furrer”, just like “Führer”.  Of course that wouldn’t do at all. So I contacted the maire of Carouge and asked him if I could change my name to Christa de Carouge. He was quite enthusiastic, agreed spontaneously, and ensured that this new name would be entered in my passport as a nom de plume.

Do you consider yourself to be a brand?
Yes, I have become a brand.

A strong brand is very valuable. Would you ever sell your name?
Never! But we are repeating the business principle with my successor. She is of Turkish descent and is named Deniz. Out of this we have created “de Niz”.

Have you sold your business to Ms. Deniz?
No, I only gave her the patterns and handed over to her the relationships with the fabric suppliers. For now I’m accompanying her, like a mother, while she builds up her business. She was my best seamstress for over 20 years. Based on one of my sketches, she could create the pattern spontaneously and show how the work had to be carried out. But I’m keeping my name. Selling it would have been like betraying my identity. Besides, I still have a lot of plans for the name.

For example?
From November 2017 to February 2018, there will be an exhibition at the Kunsthaus in Zug. It is simply called “Christa de Carouge”.

Tell us more about this exhibition!
It will certainly not be a fashionable exhibition. I want to do installations. One room will be laid out entirely with clothes on the floor. Visitors will be allowed to walk over them (with their shoes off, of course). The clothes will be like a carpet that they can experience and “inhabit”.

Are your creations made for everyone?
Yes… well, actually no, not for these clothes horses in their high heels who are always racing around after the latest trends. That is simply not my world. You will never see me at an opera ball or some such event like that. Never!

What do you think about creative chefs?
Perhaps they’re artists. But I don’t frequent them, because I don’t think much of nouvelle cuisine. Here, too, what’s fashionable is not my style.

So what is your culinary style?
A good rösti, a fine "gschnätzlets", boiled beef, la cuisine mijotée, honest market fare.

Where can you find that in Zurich?
At my place [laughs].

Do you take reservations?
In actual fact, I used to have a second big table here when I would have my many guests over for dinner. But I’m 81 now and I don’t like cooking for more than eight people any more.

How strongly have other cultures influenced your identity?
Very strongly. Take the Japanese kimono. I visited the Zen monk in Kyoto and immersed myself into his culture. That is where I learned how important the texture of the fabric is for the kimono. Unfortunately, no one could tell me where the fabric was available for purchase. I searched for it for five years and then one day I was at a fabric fair in Paris and saw the booth of a Japanese company that was offering exactly these fabrics.

And that’s when you designed the Kimono de Carouge?
No, I was so happy and fascinated to have found this fabric that I just let it sit there for two years, with me looking at it over and over. Having said that, it was never my intention to copy a kimono. The only thing I appropriated in my kimono designs are the sleeves and the closure on the collar. By the way, this long – and ultimately successful – search for the kimono fabric taught me that one must never give up in life. Never! Keep looking, keep on going!

Christa de Carouge is a graphic designer and couturier. She grew up in Zurich, where she worked in various graphic studios before turning to fashion design in the 1960s. In 1978, she opened her own studio in the Geneva suburb of Carouge, and in 1983 she opened a shop in the Mühle Tiefenbrunnen in Zurich, which closed at the end of 2013.

Who are we? What makes us matter? The question of our identity moves society; art, science, politics and every one of us seek answers. This interview with Christa de Carouge is one of numerous contributions that illuminate the topic of identity from a new, inspiring perspective.